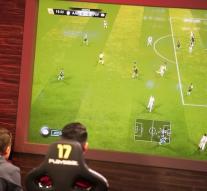 - The first Dutch e-battle in FIFA17 between Ajax (Koen Weijland) and PSV (Romal Abdi) ended in a victory for the Eindhoven side. The two professional e-names players in Pep talk on Ziggo Sports against each other.

After the first game ended in a goalless draw, had a second pot to be useful. In the second game Abdi patted his 'Amsterdam' opponent 1-0.

Now the e-battle is settled in favor of PSV, Ajax will be extra motivated to come Sunday in the Premiership extra good for the day. The Amsterdammers the champion then get 'really' visit. The last two times that the people of Brabant guests were in Amsterdam, PSV won.