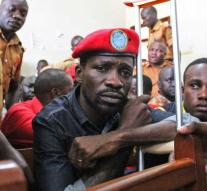 kampala - In Uganda, protests broke out on Friday after parliamentarian and pop star Bobi Wine was stopped at the airport. Wine, whose real name is Robert Kyagulanyi, and another opposition member wanted to be treated medically abroad. They would have been tortured when they were in detention.

Protesters took to the streets in the capital Kampala on Friday. They burned tires according to witnesses and blocked roads.

Wine has emerged as an outspoken critic of President Yoweri Museveni, who has been in power since 1986. The authorities arrested the opposition member and other parliamentarians earlier this month after stones were thrown to a presidential convoy.

Followers say that Wine, suspected of betrayal, is beaten with an iron bar. He would need specialized medical assistance. The police reported Thursday that the politician was stopped at Entebbe International Airport because he is free on bail.