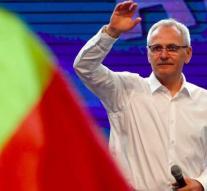 bucharest - The leader of the Romanian government party PSD has a large-scale protest against corruption and his government a 'failed coup d'état \u0026 # x27; \u0026 # x27; called. Social-Democratic leader Liviu Dragnea also complained in an interview with television channel Antena 3 that President Klaus Iohannis encouraged demonstrators.

Some 100,000 people took to the streets on 10 August to demonstrate against the government. The riot police used a water cannon and fired tear gas. Some demonstrators threw stones and bottles, but video footage also shows how agents strike protestors who have put their hands in the air. Hundreds of people needed medical help afterwards.

Iohannis condemned the actions of the security services. Dragnea now accuses him of having undermined the police and inciting demonstrators to violence. The PSD leader clearly wanted to get rid of the president, who had previously clashed with the government. One of the reasons for this was that Iohannis had to dismiss the head of the anti-corruption (DNA) department.

Dragnea is very influential within the government. He can not become a prime minister himself because of a conviction for unlawful election practices.