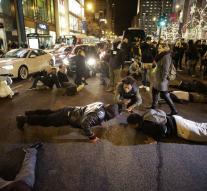 - In the US city of Chicago is Friday some 2,000 people took to the streets to protest in response to images that were released Tuesday from a white officer who shot a black teenager. Since that time there were evening protests, but with fewer participants.

The demonstrators had banners with them with slogans like ' Stop police brutality ' and called, among other things " 16 bullets, 16 bullets ", referring to the number of bullets from the gun of a police officer making the 17-year-old Laquan McDonald was hit in October last year. The agent, Jason Van Dyke, was Tuesday charged with murder. A judge ruled that he should not be provisionally released on bail.

The protest was blocked one of the main shopping streets of Chicago. Additional bad news for the entrepreneurs in that street. Friday was the fact Black Friday in the United States, the day is seen as the start of the shopping for the holiday season in the US

Also on the other side of the US protest against police violence against black Americans. In Seattle were hundreds of people on their feet. There was deliberately chosen to Black Friday " disrupt trade and to inflict economic damage ", protesters have stated to the Seattle Times. At least four people were arrested because of unrest in malls. A policeman was injured when the police intervened.