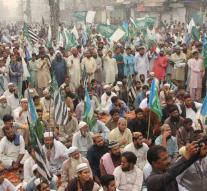 islamabad - Protesters have blocked roads in Pakistan for the second day in a row. They are furious because the Christian Asia Bibi has been acquitted of blasphemy by the Supreme Court. Prime Minister Imran Khan has warned protesters not to go too far.

Bibi spent about eight years on the death row because she would have insulted the Prophet Muhammad during a row with neighbors. The Supreme Court ruled Wednesday that it should be released. This led to division in Pakistani society. The radical Islamic TLP party has mobilized its supporters to protest against the verdict.