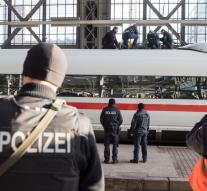 frankfurt - A group of radical environmental activists on Saturday blocked a special train to the German Environment Minister Barbara Hendricks (SPD) was on his way to the climate summit in Paris. Some activists chained themselves to the tracks when the train stopped at the main station in Frankfurt. Other protesters allowed themselves with ropes descend on the roof of the train, said a police spokesman.

One of them shouted from the roof of the train that the participants in the climate " not part of the solution, but part of the problem ". Hendricks vainly tried to talk the young demonstrators from the roof. The activists reacted abruptly and demanded the resignation of the minister.

It took at least two hours before the activists were unleashed and the train could ride on.