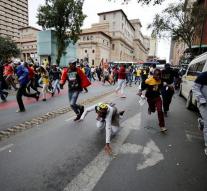 pretoria/johannesburg - Tens of thousands of South Africans are Friday in major cities took to the streets to demand the resignation of President Jacob Zuma. The protesters are angry that Zuma has dismissed the popular Finance Minister Pravin Gordhan and many posts have reallocated his cabinet.

Johannesburg led the protest to riots and several wounded. Police fired rubber bullets and tear gas at supporters of the ruling party ANC when he tried to break the cordon between them and the demonstrators from the opposition Democratic Alliance. This was called to protest against Zuma. It gave many hearing incessantly blowing their vuvuzelas brought.