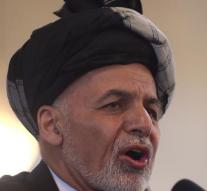 cabul - Afghan security forces shot in Kabul on Friday to dispel a raging crowd of protesters. The over a thousand activists gathered in the capital to demand the resignation of the government of President Ashraf Ghani.

The protesters held Ghani and Prime Minister Abdullah Abdullah responsible for the attack Wednesday with a tanker of explosives in a district with embassies and ministries. As a result, about ninety people died and about 460 people were injured.

According to an Afghan intelligence service, the Haqqani network is thought to be behind the attack. This terrorist group maintains ties with the Taliban and al-Qaeda. The protesters in Kabul claimed Friday that members of the Haqqani network in prison are being executed. ''