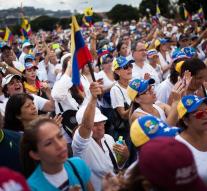 caracas - Thousands of white-clad women sat at a protest march in Caracas took to the streets. They expressed their dissatisfaction over the fact that the electoral authority (CNE) in Venezuela has suspended the referendum campaign by opponents of President Maduro. The march was organized by Lilian Tintori, the wife of imprisoned opposition leader Leopoldo López.

Thursday was the campaign to organize a referendum is suspended because the CNE suspects that fraud is collecting the signatures. According to the opposition, this decision is not constitutional.

When the referendum would vote on the deposition of Maduro. The president, according to polls extremely unpopular. Venezuela is in a deep economic crisis. At the most basic goods, from food to toilet paper, have serious deficits.