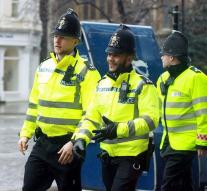 - "British police have arrested dozens of people during a demonstration at a Sikh temple in the city of Leamington Spa. The demonstrators urged according to British media inside the prayer house to prevent a marriage of people with different beliefs."

"The group held the foyer of the building occupied for about eight hours. They were probably taking their meaning: the planned marriage between a Sikh and a Hindu had to be postponed according to The Guardian. Protesters in recent months would have tried several times to enter the temple in protest against mixed marriages."