Home / World / Protest during the inauguration of President Honduras 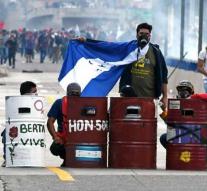 tegucigalpa - The Honduran president Juan Orlando Hernández was sworn in on Saturday for a second term of four years after controversial elections. The course of events again led to great protest in the streets of Tegucigalpa and to skirmishes between police and many thousands of demonstrators.

The conservative businessman Hernández, member of the National Party of Honduras and protégé of the US, seemed on the way to a defeat in the battle with his center-left rival Salvador Nasralla at the end of November when the counting of the votes abruptly ceased. After the resumption and a partial recount, Nasralla eventually lost the ballot box. The opposition complained about fraud. More than thirty people died during disturbances.

Hernández called for unity after his inauguration. His supporters chanted that word and waved the blue-white Honduran flag. 'If a house is divided against itself, it does not stand up', the president quoted the Bible. 'I promise to bring about a reconciliation process among all Hondurans. '