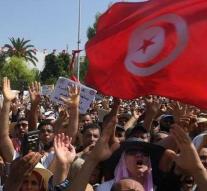 tunis - Hundreds of Tunisians have taken to the streets to protest against the government plan to improve the rights of women and gays. The demonstrators, including clerics, gathered in front of the parliament building on Saturday to express their displeasure.

The demonstrators had placards with texts such as 'No to change God's word' and 'Tunisians adhere to the teachings of Islam'. Others raised the Qur'an and loudly condemned the proposed reforms as disastrous for the identity of the country.

A committee set up by President Beji Caid Essebsi came up with proposals in June. This includes equal rights for men and women, for example in the distribution of an inheritance. Sharia stipulates that a son gets twice as much from the inheritance as a daughter.

It is also recommended that homosexuality- a big taboo in Arab countries- be taken out of the criminal sphere. Essebsi is expected to present the bills on Monday.