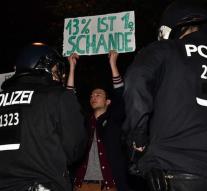 berlin - In several German cities, Sunday night hundreds of people went up to demonstrate against the right-populated Alternative für Deutschland (AfD), chosen in the Bundestag.

For the building on Alexanderplatz in Berlin where AfD heads and hangers celebrated their election successes against the thousands of people on their feet. They cried leaning against the AFD and provoked their disapproval with whistle. Here and there a bottle of stone flew through the sky, but generally, according to the police, it was peaceful. A woman who had thrown an egg was picked and taken from the crowd.

Also in other cities was demonstrated, including Cologne, Frankfurt, Hamburg, Munich and Düsseldorf. Many people aired their displeasure on Twitter. Under the hashtag # 87Prozent, people who themselves voted for the 87 percent of voters who did not vote on the AFD reported themselves.

According to exitpolls, the AFD becomes Germany's third party. The party is expected to reach more than 13 percent of the votes, which is more than previous polls (11 percent). The party was founded in 2013 by Eurosceptics who mainly turned against the euro and the economic policies of Berlin and Brussels. The party has since been moved to populist right after a series of internal arrays, and is mainly against immigration.