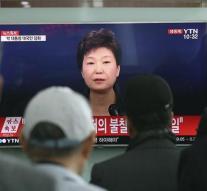 seoul - Prosecutors will start next week questioning the South Korean President Park Geun-hye. They have, according to the Yonhap news agency no response from the presidential palace, but are determined on Tuesday or Wednesday Park to the tooth to feel about a scandal involving a friend of Park, Choi Soon-sil.

It would be the first time that a South Korean head of state prosecutors on the floor. The law does not allow the president in office is actually prosecuted. Park has to answer earlier questions of justice.

Prosecutors are in a hurry because the current term expires for the detention of the arrested Choi November 20th. Choi was arrested suspected of fraud and abuse of power. Choi would have long about forty years have been a close friend of Park. She would that have abused positions, including by getting companies to give money to obscure foundations.