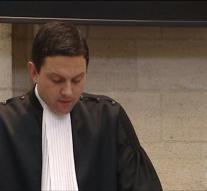 rotterdam - Prosecutor Lucas van Delft is not prosecuted for making a false report about death threats against him. That the Public Prosecutor (OM) decided. The report led to measures to protect him and his family.

After it was likely that Van Delft itself had made the notification clearly, has launched a criminal investigation and he was suspended by the PPS. Delft was under pressure when he passed the threats.

Given the circumstances, the national prosecutor's office has dropped the case. When the decision is taken into account that Van Delft by his employer, the Public Prosecution is punished. He is no longer employed for two years as a prosecutor and he goes to work at a different prosecutor. He was put back in salary and the prosecutor expressed regret.


Delft reported last year under a false name that people were going to liquidate him. In an interview with NRC Handelsblad, he acknowledged later,, frankly '' that he has made mistakes. The prosecutor said to have come to his act because he could no longer withstand the stress of his work.