Home / World / Proposal of Turkey to US to recapture Raqqa 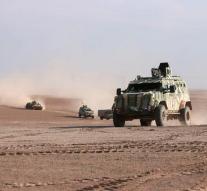 ankara - The Turkish government has to work together with the United States proposed an offensive against the Syrian city of Raqqa, by Islamic State (IS) until capital has been declared. Ankara wants to send troops to the front line, but give tactical support to the Free Syrian Army (FSA) and other militias fighting against IS.

The newspaper Hürriyet and other Turkish media reported that Prime Minister Binali Yildirim has put forward the proposal in Munich. Yildirim that represents Turkey at a security conference. The US vice president Mike Pence has traveled to the conference.

Yildirim said that Turkey not see a role for the Kurdish militias YPG and PYD in the operation against Raqqa. Ankara considers the PYD and YPG as an extension of the outlawed Kurdistan Workers' Party PKK. 'We have let the Americans know that you can not use one terrorist organization fighting another terrorist group,' said Yildirim.