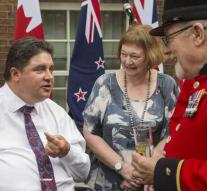 ottawa - The Canadian Minister of Sport has resigned after allegations of inappropriate behavior. Prime Minister Justin Trudeau announced the resignation of Kent Hehr on Thursday after earlier in the day the leader of the Progressive Conservative Party in the province of Ontario had resigned for the same reason.

The government had started an investigation into Hehr who is accused of having made an inappropriate comment to women. 'We think it's important to support women who come out with accusations and that's exactly what our government will do,' Trudeau said in a statement.

Hehr says that he supports the research and stays as a member of parliament. In December he said that he can sometimes be inappropriate. He now adds that he has always tried to behave with respect towards others. '

Opposition leader Patrick Brown in Ontario rejects all accusations. Because of the party interest, he gets on.