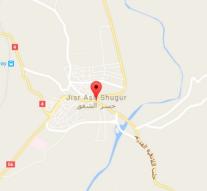 amman - Prominent al-Qaeda leader Abu al-Faraj al-Masri Monday by attacking slain with a drone. This was announced by two jihadist sources. The Egyptian, known domestically as Ahmad Salama Mabruk, was in a car that came under fire near Jisr al-Shuqour, in northwestern Syria, from an unmanned plane.

The area is controlled by the militant group Nusra Front, formerly the Syrian branch of al-Qaeda today Jabhat al-Sham Fateh wants to be called. Al-Masri, who fought earlier in Afghanistan, was one of the most important figures. The London-based Observatory for Human Rights confirmed the drone attack but did not indicate that the commander was therefore killed.