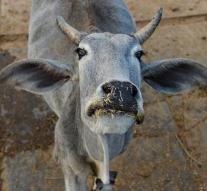 new delhi - The Supreme Court in India has swept a general ban on the trade in cows for slaughtering the table. The government of Narendra Modi had introduced the ban in May. Earlier, a lower court already ruled that the ban was in violation of the rights of the people to decide freely about their food supply.

A majority of India's population is Hindu and in their religion the cow is a sacred animal. In most Länder, slaughter of cows is prohibited. The trade took place in May. Cattle could only be traded when it came to dairy cows.

The governments of states where predominantly Muslims live and cows are consumed had already ignored the ban.