Home / World / 'Prohibition in Nice on both BURQINI as habit ' 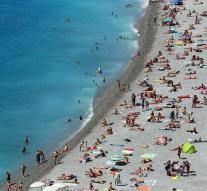 - Even French nuns in their habits are not welcome on the beach of Nice. That Deputy Mayor Rudy Salles said in Thursday night's BBC radio program World at One.

Salles was asked about the controversial boerkiniverbod in force on the beaches of Nice. The deputy mayor said that Catholic nuns can expect the same treatment as Muslim women as they appear in their religious clothing on the beach.

,, If you go to the beach you wear a bathing suit. You can not wear what you want. I can not go naked, which is forbidden, '' said Salles, who described wearing a BURQINI as a provocation,, '.


In 32 French municipalities banned Islamic swimsuit. The French League for Human Rights has protested to the Council of State against the bans. Foreman Jean-Pierre Dubois was at World at One succinct in his assessment of the forbidden:,, It's just discrimination, '' he said.

The French Council of State makes statement on Friday the boerkiniverboden.