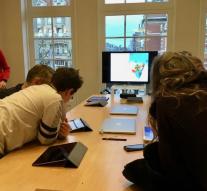 amsterdam - More and more schools start with it, but programming as a school subject is not completely established yet. Fortunately there are a lot of extracurricular activities for children and parents who want to learn these new basic skills. Apple, for example organizes special workshops which run through the basics of programming.

At a table in the Apple Store in Amsterdam are three children accompanied by parents, attentively listening to the explanation. For those on the table iPads containing the app Swift Playgrounds, an application from the iPhone maker which playfully explain step by step how to write a program works. One of the store employee is temporary teacher and explains where to start.

Swift Playgrounds is important to help a creature by a game world in which he must collect gems. This move is done by entering commands via programming language Swift- which can actually be used to make apps. During the workshop early this explains, but also some functions (concatenated messages) and For Loops (which functions can be repeated) are.

It does not fall on deaf ears after every piece of explanation, the children eagerly pounce on the iPads to execute commands in the app. 'So is not it, this is really very difficult,' it sounds all pretty smoothly, though late, the young programmer does not undaunted and works contracts- with some help from dad next door- clean through.

The parents are heavily involved. Enthusiastically they tap you on their iPads and ask questions- it seems almost as if they even have a little more difficulty with the matter than their sons and daughters.

The goal of course is to stimulate interest in the programming art. The workshops in the Apple Stores in the Netherlands are still given until December 11. You can register via the Apple website.\n  \n  \n   advertisement

Through Code. org are also other initiatives, programs and information available about learning programming.