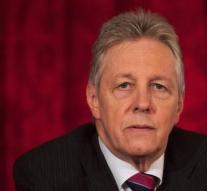 The Unionists won 28 of the 90 seats. Sinn Feinn received more than a thousand votes less than the DUP, the smallest difference from the parliamentary history of Northern Ireland. In total, 800 000 Northern Irish their votes, the highest turnout in two decades.

Despite their defeat, Sinn Feinn can be satisfied with the outcome. In the elections last year, the difference was with the DUP still ten seats. Sinn Fein leader Michelle O'Neill also spoke of a 'great day. 'Her party was never before so close to an election victory.

The two largest parties now have three weeks to form a coalition government. Big point of contention will be the Brexit. Northern Ireland borders on the Republic of Ireland and do not want from the EU majority. 'Let us now look ahead with hope that decency back into our politics,' Prime Minister Arlene Foster told her supporters after the victory.

'There is work to be done to the electoral battle disturbed relationship to heal again,' she referred to the vicious campaign of both parties. DUP-candidates fetched for the first time less than half of the total number of seats.

In January, the Northern Ireland Deputy First Minister Martin McGuinness resigned. He did this out of anger at the refusal of Foster to step down after a scandal went wrong subsidies for renewable energy. Fosters party, the DUP wants to maintain the closest possible ties with the UK. The Northern Irish republicans of Sinn Fein just want to join the Republic of Ireland.

The two opposites working since the Good Friday peace agreement in 1998 together in the government of the nearly two million inhabitants, Northern Ireland.