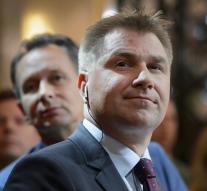 zurich - The right-wing Swiss People's Party SVP Sunday has won a great victory in the parliamentary elections. The party , which was already the largest in parliament, took 28 percent of votes in total 65 seats. The Swiss parliament has 200 members.

Political commentators speak of a swing to the right. " The party has immigration as its main theme. According SVP leader Toni Brunner , the Swiss people gave a clear message. " The people are concerned about mass immigration to Europe."