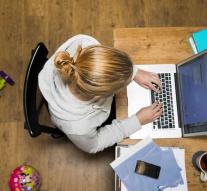 rotterdam - The privacy of people renting communal apartments on the trip, because these organizations sufficiently protect customer data. According to a study by consultancy and auditing firm BDO.

The agency took the situation in 31 housing associations under scrutiny and calls the findings arising therefrom alarming. 'They have their information by no means in order. The majority has no concrete security and does not have the right knowledge of existing and impending privacy laws. That run housing associations not only behind other (semi) public sector, but they also put the privacy of tenants at stake. '

BDO advises corporations to press ahead with the screening of the files, because the data recorded by laws and regulations therein are becoming more sensitive. 'Where the name, address and payment details of tenants earlier sufficient, corporations have since 2011, for example, need their income information and Social Security number. Often face additional issues such as family composition, (parts of) medical records and recorded any criminal history. '

The agency recommends that more and better evaluate internal organizations include the data security.

Aedes, to make the dome housing associations, recognizes criticisms of the report and allows busy Improvements. 'We have developed include a manual with guidelines in the field of data security for landlords,' said a spokesman. 'The next time these issues remain a concern for us. '