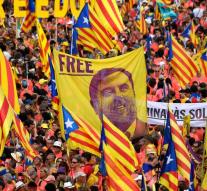 barcelona - The deposed Catalan vice president Oriol Junqueras will be tried in the coming months together with seventeen other separatist Catalan leaders for his role in last year's unsuccessful attempt at retaliation.

The judges of the Spanish Supreme Court have announced that the investigation phase has been completed. The sessions are likely to start at the end of this year.