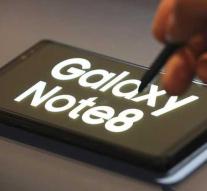 pyeongchang - The smartphones that sponsor Samsung hands out to the athletes during the Winter Games in Pyeongchang cause a remarkable problem. Because of UN sanctions, the athletes from North Korea and Iran do not get one. Iran is now in anger and has called the ambassador of South Korea in Tehran on the carpet.

The South Korean Samsung gives all athletes on arrival at Pyeongchang a Galaxy Note 8 worth about eight hundred euros. However, the popular means of communication passes by the noses of four Iranian and 22 North Korean athletes.

'That is immoral and against the Olympic spirit', says the angry Iranian Ministry of Foreign Affairs. The South Korean ambassador stated that neither the government in Seoul nor Samsung had anything to do with this decision. The head of the Iranian delegation has now declared that he will give his athletes the smartphones themselves.