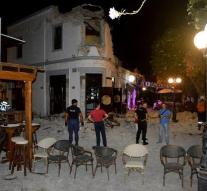 kos - From a first survey of the major Dutch travel organizations in Kos and Bodrum, no landmates were found to be injured. Sunweb, TUI and Corendon still hold a small battle because it's possible that a single at the hospital has not yet been reached.

After the earthquake of the night, which especially struck the Greek island of Kos, the organizations immediately began to contact all Dutch holidaymakers. This included travel guides and text messages. For now, it seems that only a few people have a few scratches. The two dead that fell on the island are a Turk and a Swede.

Especially the old town and the port of Kos are severely damaged. Especially in the celebrity celebrity's popular Bar Street it was busy. That is why the two dead have fallen. Most Dutch tourists, however, stay in resorts outside the city. They are fairly new and built to withstand earthquakes.

If people want to go home earlier, then according to the travel agencies. On flights that fly today from Kos to the Netherlands there is still space. For a fee, the travelers do not have to count on it; After all, there is no negative travel advice.

Flights to Kos and Bodrum are also ongoing. Only a Transavia flight was delayed this morning because the airport on the Greek island was temporarily closed. A flight from Corendon on Bodrum could leave without any problems.

In Bodrum and surrounding area, the damage comes with, let travel agencies know. There was a small tsunami at Gumbet, a suburb of the Turkish tourist attraction. But as it came to land in the hollow of the night, nobody was on the beach.