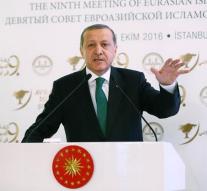 - Turkish police on Wednesday dozens of politicians from the pro-Kurdish political party HDP arrested. The politicians who were arrested during raids in the southeastern provinces of Van and Hakkari, accused of membership of the banned Kurdish Workers' Party PKK.

Police stopped Tuesday even thirty politicians. Minister Recep Tayyip Erdogan called the HDP an extension of the PKK. The latter organization considers the government as a terrorist movement.