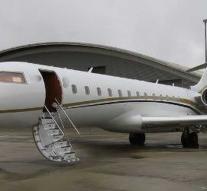 hampshire - On board a private jet, 500 kilograms of cocaine were found at the airport in Hampshire, England. The plane was from Bogota, Colombia.

The drugs have a street value of around 57 million euros. Two Britons, two Spaniards and one Italian have been arrested on the suspicion of importing cocaine, reports BBC.

The cocaine was hidden in packages of about one kilo, divided over fifteen suitcases. 'It is a huge amount of cocaine, one of the largest parties that has flown into the United Kingdom for a long time,' the authorities say. 'This must be a big blow to organized crime. '