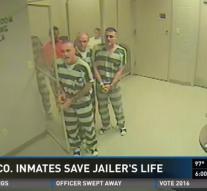 weatherford - A jailer owes his life to the brave actions of a group of prisoners. The prisoners broke out of their cells when they saw that the guard had a heart attack.

The feat was captured on video. It shows how the guard slides down when he gets a heart attack. The prisoners with whom he has moments before jokes are creating, have immediately that something serious is going on.

Risking their lives to open the detainees the door of their cell. 'I was worried, because if we break them out with guns drawn on us,' said one of them at a local news station.


The guard was found to have no pulse after which the prisoners sounded the alarm by shouting loud and store doors. The shouting was heard by agents who were one floor up in a courtroom. They thought at first that there was a rebellion and went with pistols drawn into the room.

But soon they realized there was something else going on and they were able to provide first aid guard. Thanks to the rapid intervention his life was finally rescued, police said.


The prisoners say in the interview that they had thought of no time the guard a pistol and a key was with him and that they therefore could make an attempt to break out. 'I never thought of that. If it falls, I help him. '