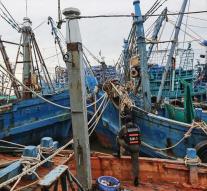 rome - Six members of a human trafficking gang convicted in Italy for the death of hundreds of people on board a refugee ship in the Mediterranean. The court in Palermo put the Eritrean condemned prison sentences of between two and six years on, the Italian news agency ANSA reported. It was the first time that the Italian court dismissed a case against traffickers sentence.

The sinking of the refugee boat, near the Italian island of Lampedusa sank, it took in October 2013 366 Eritrean and Somali migrants living. They were put Libya on the boat by the gang.

Three henchmen of the convicts, including the alleged leader of the gang, take refuge in Libya.