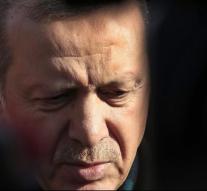 - A woman in Turkey has been nearly a year in prison for insulting Minister Recep Tayyip Erdogan. According to Turkish media she received the punishment because they were in 2014 when Erdogan was still prime minister, in Izmir yelled at him and made an offensive arm gesture.

The incident occurred when Erdogan a meeting of his party left on a square in Izmir. The wife, the economist Filiz Akinci, stood on a balcony and made the gesture when Erdogan passed.

The court gave the woman an extra heavy penalty because Erdogan is an authority figure. The lawyer for the wife argued that Erdogan was there as party leader and not as prime minister and that there was no question of insulting a public official.