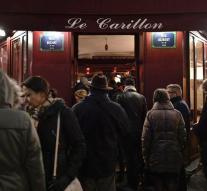 - A 24-year-old woman has been sentenced to imprisonment for one year because she posed as a victim of the attacks in Paris last year. That report French media. She came a month after the attacks with her arm bandaged at a police station in the French capital and said she was injured in the bar Le Carillon.

She told all sorts of details about what happened during the attack on the bar. The woman fell through the basket as she spoke of an explosion, while Le Carillon was attacked by terrorists with Kalashnikovs. After extensive research also came to light that were forged her medical certificates about her injury. In February, the unemployed mother finally conceded that she had fabricated her story.

she offered her apologies to the court. 'It is unacceptable for what I did. I was especially worried that I did not have enough to feed my child, 'the woman said.