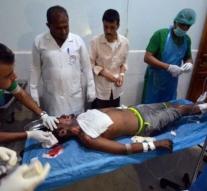 sanaa - A prison in Hodeida, a city in Yemen, was bombed three times so far by the Arab coalition. At least 33 prisoners and guards lost their lives. The prison is located in the district of al-Zaydiyah. There were 84 captives when the building Saturday night (local time) three times was bombed by warplanes.

By Saudi Arabia-led coalition has been fighting against Houthi rebels since March 2015, to give back the power to the internationally recognized president Abd-Rabbu Mansour Hadi. Who was ousted late 2014.