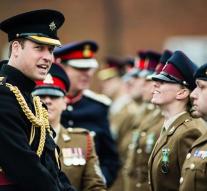 london - Not only Prince Charles, and his son William gets secret British government documents. The second in line of succession to the throne receives the documents,, occasionally '' and,, when they are relevant '', said a source at the court against the newspaper The Guardian.

This week it was announced that Charles has been receiving for decades confidential documents from the Cabinet because he- next example the Queen- is on the permanent mailing list.

Politicians called it remarkable that Charles gets the documents and called him, the most knowledgeable lobbyist. Charles is regularly criticized because he too much meddling with political affairs

William will see fewer documents than his father. What he can see will include about countries that he visits formal.

Opposition Labour Party has called to investigate the matter.