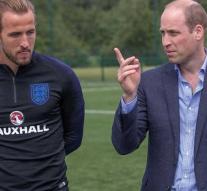 - The British Prince William visited the English national football team on Thursday. In Leeds he took a look at the final preparations of the group before the footballers go to the World Championship in Russia next week.

William, chairman of the English Football Association, interrupted the training to have a chat with the group of footballers who must do it in Russia for England. He also had a meeting with coach Gareth Southgate and captain Harry Kane. William wished the team a lot of success during the tournament.

For the nineteen-year-old Trent Alexander-Arnold, William had a special present. The Duke of Cambridge handed him his competition shirt for Thursday night, when England is practicing Costa Rica. Alexander-Arnold has to make his debut for the English team, but is already included in the World Cup selection.