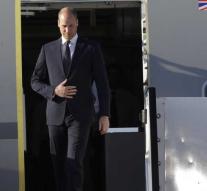 - Prince William arrived on Monday as the first member of the British royal family in Israel for an official visit. He begins in Jerusalem and will meet Israeli and Palestinian leaders during his four-day visit.

In Jerusalem he stays at the King David Hotel, once a center of British rule over Palestine. In a bomb attack on the hotel by Jewish extremists, more than ninety people were killed in 1 July 1946.

The British princess and grandmother of William, Elizabeth II, has been in charge since 1952 but has never visited Israel, which is based in the former British mandate of Palestine. The role of the British in establishing a Jewish state in Palestine is still controversial. The last British troops withdrew in May 1948, which immediately led to the declaration of the state of Israel. A great-grandmother of William, Princess Alice of Battenberg (1885-1969), was buried in Jerusalem.