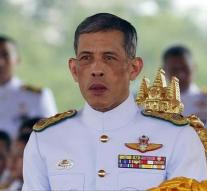 bangkok - The Thai Crown Prince Vajiralongkorn is Thursday formally appointed as the new king of Thailand. The 64-year-old Maha follows King Bhumibol, who died in October at the age of 88.

Maha had confirmation briefly postponed after the death of the hugely popular king because he wanted to mourn with the people.

The formal coronation Maha follow until late next year, in a ceremony with rituals of Buddhism and Brahmanism. He will include an umbrella with nine ribs, symbol of royal power. There is a ritual washing and getting the king nine jugs with water from eighteen different places in Thailand.

Maha collects after Thursday is expected to own a group of advisers around him. Thus it replaces the often very old advisers of his father, whose 96-year-old Prem Tinsulanonda was temporary regent after Bhumibols death.