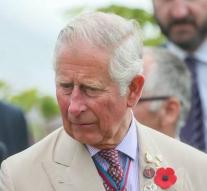 - Prince Charles ended the anniversary of the Battle of Passendale, exactly one hundred years ago, with two small ceremonies in Belgium. The British Prince attended the Welshe National Memorial Service at the Welsh National Memorial Park in Langemark on Monday at the beginning of the evening and finished off at Artillery Wood in Boezinge.

After the grand memorial at Tyne Cot Cemetery and a visit to the Memorial Park in Zonnebeke, Prince Charles drove to Langemark and Boezinge. Prince William and his wife Catherine were already home, like the king of Belgium, Filip and Mathilde.

In Langemark, Charles as a prince of Wales attended a memorial ceremony. The Welshmen also played a major role in the Battle of Passendale. Among the victims of this battle was the poet Hedd Wynn. Prince Charles made a poem about Hedd Wine by Robert Williams Parry in Welsh and English. It made for a very quiet and understated moment. The ceremony was decided with the disclosure of memorial stones.

After that, Charles moved to Artillery Wood Cemetery where Hedd Wynn and Francis Ledwidge, another poet, were buried. The prince of Wales listened carefully to a guide explaining the tombs, in the presence of, among others, Prime Minister Geert Bourgeois and British ambassador Allison Rose and Irish Ambassador Eamonn Mac Aodha. Here was a last wreath laying. After that, Prince Charles took the time to talk to a lot of young people, just like at the Welsh Memorial Park before saying goodbye. This does not mean the commemoration of the battle, because July 31 was only the beginning. The battle lasted until 10 November.

On August 19th, a Scottish memorial commemorates a grand Australian ceremony on September 26th, a German commemoration in Menen on October 12, a New Zealand ceremony and a Canadian on November 10th, because it was the Canadians Passendale, or what Left of it, could eventually take it.