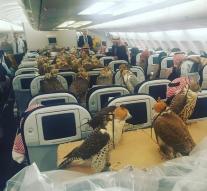 jeddah - A Saudi prince is so exorbitantly rich that he also reserved eighty airplane seats for his eighty falcons. A photo that shows how the birds each one have their own spot at their disposal in the Airbus A330, is currently going around the world.

Ahmet Yasar placed the remarkable snapshot online. He told US media that the plane was on its way to Jeddah in Saudi Arabia. 'I get this picture of a friend who is a pilot,' he wrote there. For what company it was, Yasar would not say.

What seems? Several airlines such as Etihad and Qatar stand falcons to board for a bonus of up to $ 630 per bird, depending on the destination. German flyer Lufthansa even offers special tools to convey the falcons.

In itself not surprising, when you consider that the fastest falcon- the birds are used for races- produces 250 000 dollars. About as much as a luxury Bentley.