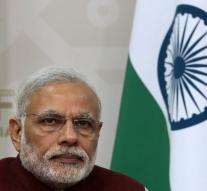 - The Indian prime minister Narendra Modi on Friday made a surprise visit to his Pakistani counterpart Nawaz Sharif. It is the first time in ten years that an Indian Prime Minister visits the rival nation.

Sharif embraced Modi after he landed at the airport in the eastern city of Lahore. The two then boarded a helicopter to the nearby estate of Sharif.

A spokesman for the office of the Pakistani prime minister said the two leaders discussed a range of bilateral issues, including the disputed Himalayan region of Kashmir, the most contentious issue between the two nuclear powers.

Modi was on his way home from a visit to Russia. He stopped earlier on Friday also in the Afghan capital Kabul.