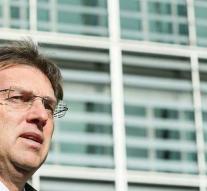 ljubljana - Slovenian Prime Minister Miro Cerar announced his departure on Wednesday evening. The Supreme Court had drawn a line earlier in the day due to the outcome of a referendum on the construction of a 27-kilometer long track.

In September, voters gave the green light for the approximately € 1 billion project, which according to opponents was too expensive. However, the court ruled that the government's campaign was 'one-sided'. The referendum must therefore be repeated. No new date has yet been announced.

The Slovenian parliamentary elections are scheduled for June this year. It is still unclear whether the departure of Cerar means that voters have to go to the polls earlier. The Prime Minister announced that he would remain in his post until a new government was formed.