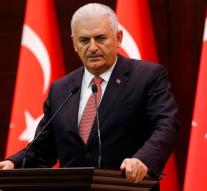 - Turkish Prime Minister Binali Yildirim claimed that the coup by a group of soldiers are beaten down, and that the chief of staff and commanders are largely in control of the situation in the country. He said Friday at the Turkish state broadcaster TRT, which is again in the air.

A presenter was Friday night under threat of a gun are forced to read out a statement on behalf of the coup plotters. In it they claimed to have taken control.

Prime Minister Yildirim said that the uprising must be attributed to the Gülen movement, recognized opponent of Turkish President Recip Tayyip Erdogan.


Erdogan is moreover Friday landed around 02. 20 pm at Ataturk Airport in Istanbul. Which has reported a Turkish government official. Erdogan where exactly was the last night, is not clear.

Erdogan's spokesman Ibrahim Kalin announced that the President in the next few hours in the night from Friday to Saturday will make a statement. 'He oversees ongoing efforts to bring the situation under control.'

Kalin kept the coup plotters responsible for the bomb blast in the parliament building in Ankara. 'But the people have shown that solidarity with democracy and elected government. This situation will end soon.'