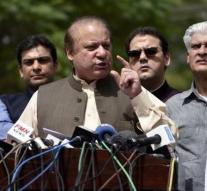 islamabad - The supreme court of Pakistan has left the country's prime minister out of office. Nawaz Sharif is accused of corruption and money laundering.

Against Nawaz, a survey was launched last year on the so-called Panama Papers on tax havens. This showed that Nawaz and his family had bought valuable property in London through companies in tax havens.

The 67-year-old Sharif denied having done something wrong and warned that his deposition would destabilize the country. He calls the case a conspiracy against him. Since the independence of the British Empire in 1947, no Prime Minister in Pakistan has completed his term.