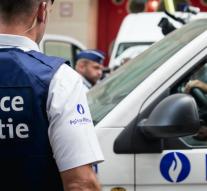 lanaken - A parish priest in Belgium's Lanaken Sunday attacked in his home by a man who said he was an asylum seeker in the Netherlands.

The robber rang the afternoon with the pastor and asked for help. He also wanted the shower. After he showered, he asked the pastor for money, but he was not in there.

This launched a skirmish in which swung the robber with a knife. The priest defended himself and injured his hands. The robber hit on the run. The victim was taken to hospital.


According to the Belgian police, the attack on the spiritual release of IS and other terror.