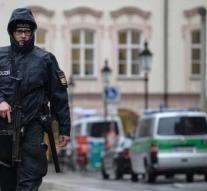 karlsruhe - German justice has in Bavaria arrested a 31-year-old man who was supposedly working for the terrorist group Islamic State (IS) and Jabhat Fateh al-Sham, which previously was called the al-Nusra Front. The Federal Public Ministry reported Wednesday that the man is among others suspected of recruiting members for terrorist groups, according to the German magazine Focus.

The man would have passed the first command in Syria including in the regions Aleppo and Raqqa on Tabqa troops Fateh Jabhat al-Sham. After the turn of the year 2013/2014, he would have IS switched to.

The end of 2015 he traveled according to German justice on behalf of IS to Germany. He would have shuttled between Germany and Greece. In Greek refugee centers, he would have tried to recruit members for terrorist groups.