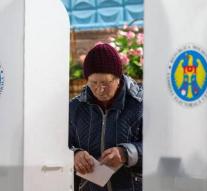 - The population of Moldova on Sunday went to the polls to elect a new president directly for the first time in twenty years. The authorities in the capital Chisinau announced after the close of the polling stations at 20:00 local time the election is quietly expired. They estimated the turnout at about 50 percent. The country has 3.5 million inhabitants.

The first relevant results will be known on Monday. If none of the nine candidates received a majority, presumably following fortnight decisive ballot with only the best two. Although the president of Moldova has mainly a representative role, he can exert an influence in particular on the course of foreign policy.