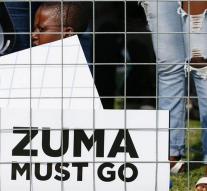 johannesburg - The South African trade union Cosatu has canceled talks from President Jacob Zuma and others on a May 1 meeting in Bloemfontein. To this end, it was decided when the audience began to stir and some showed their disapproval of Zuma.

In a live television broadcast, Zuma and his result left the stage for escalation and stepped into their cars.

Cosatu is politically connected to the ANC government party. However, the trade union called on Zuma to resign last month after sending out the Finance Minister. This popular governor was seen as an integral politician in Zuma's government team.