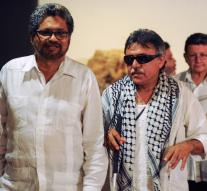 bogota - Colombian President Juan Manuel Santos wants that on 1 January peace with the FARC. He called on the FARC and the negotiators of the government to engage in "so we can be it between now and December 31st at how to end the conflict," reports the BBC.

In July, the FARC announced an unilateral cease- fire. Despite almost three years of peace talks to be held with the leftist rebels, the government was always reluctant to join the cease-fire for fear that the FARC would regroup and rearm.

Late 2012 began formal peace talks in the Cuban capital Havana. There's already agreed include participation of the FARC on Colombian politics, an amnesty, to try a truth commission and special courts for veterans who have committed crimes.

The battle between the FARC and the Colombian army has taken since 1964 to 220. 000 certainly lives.