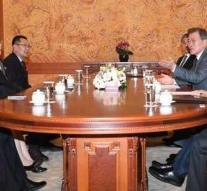 seoul - The president of South Korea, Moon Jae-in has met with Kim Yo-jong, the sister of the North Korean leader Kim Jong-un. The two met for the first time during the opening ceremony of the Winter Games, where they had shaken hands a day earlier.

' I appreciated that you stayed up late in the cold, are you okay? ', Moon asked the North Korean delegation during reception at his residence in Seoul, followed by further talk behind closed doors in an attempt improve the relationship between the two countries.

Kim Yo-jong is the first member of the North Korean ruling dynasty to visit the southern neighbor. Kim Yong-nam, the ceremonial head of state of North Korea, was also part of the group.